The suspect in a shooting Sunday night outside an Elizabeth City restaurant has been arrested in Lower Currituck County. 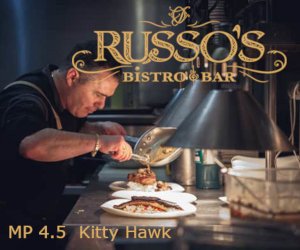 OBX Today has learned Dustin Bowen Sims, 47, of Elizabeth City, was taken into custody without incident Monday afternoon at his parents home in Harbinger by Currituck County Sheriff’s Office deputies.

Sims was wanted in connection with the shooting reported at 9:41 p.m. outside the IHOP on City Center Boulevard in Elizabeth City.

He faces charges of assault with a deadly weapon with intent to kill inflicting serious injuries and damage to personal property. The male victim was being treated at Sentara Albemarle Medical Center for three gunshot wounds.