The ninth tropical system of 2020 is expected to form as early as this evening in the tropical Atlantic, but its future track and intensity are still well in doubt.

The National Hurricane Center issued its first advisory for Potential Tropical Cyclone Nine at 11 a.m. on Tuesday for a broad area of low pressure located several hundred miles east of the Lesser Antilles, and about 2,000 miles southeast of Cape Hatteras. 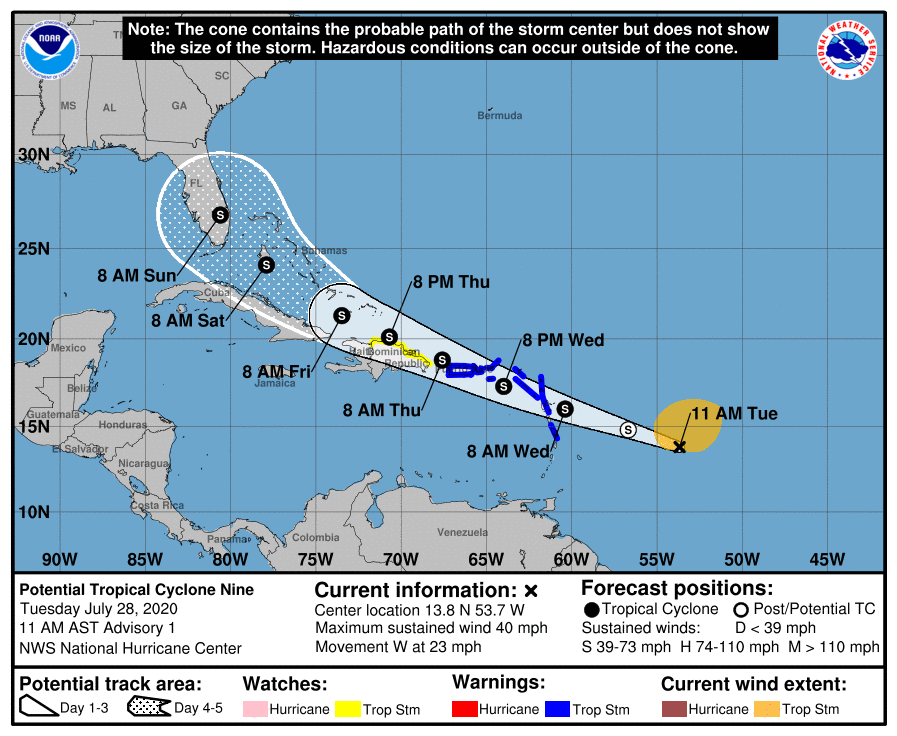 Recent visible satellite imagery and data show that the system’s circulation is quite elongated and lacks a well-defined center.

Forecasters are cautioning those factors are why it’s still to soon to know what will happen, even with some long-range models showing signs of a possible interaction with the United States by next week.

If the system is upgraded to a tropical storm, it would be the earliest ninth-named storm in history and will be called Isaias, which is a Spanish derivative of the biblical name Isaiah.

Therefore, the system is likely to become a tropical storm before it reaches the Leeward Islands and advisories are being initiated in order to issue Tropical Storm Warnings for a portion of the Leeward Islands, the U.S. and British Virgin Islands, and Puerto Rico.

A U.S. Air Force Reserve reconnaissance aircraft is scheduled to investigate the system early this afternoon, and should provide additional information on the intensity and structure of the low pressure area.

It cannot be stressed enough that since the system is still in the formative stage, greater than average uncertainty exists regarding both the short-term and longer-term track and intensity forecasts.

The hurricane center said that regardless of development, Potential Tropical Cyclone Nine will produce heavy rains and potentially life-threatening flash flooding and mudslides across the northern Leeward Islands, the Virgin Islands and Puerto Rico.

Tropical storm conditions are likely across portions of the Leeward Islands, the Virgin Islands, and Puerto Rico Wednesday through Thursday, and Tropical Storm Warnings are in effect.

The details of the long-range track and intensity forecasts are more uncertain than usual since the system does not have a well-defined center and could move over portions of the Greater Antilles later this week.

However, this system could bring some rainfall and wind impacts to portions of Hispaniola, Cuba, the Bahamas, and Florida by the end of the week.